810
0
Priyam Garg and his fifteen man squad are in South Africa for probably the biggest few weeks in the life of these youngsters. When  Garg steps onto that park as the Indian U-19 captain, he carries behind a very rich legacy left behind by some of the biggest names in Indian cricket who have captained the Under-19 sides over the year. India is the most successful team in the competition since it’s inception in 1988 with four titles to their name .
This goes on to show how big a tournament this is in the context of Indian cricket, and the efforts that go behind in preparation for this tournament. Yuvraj Singh, Mohammed Kaif,  Virender Sehwag, Virat Kohli and Rohit Sharma some of the biggest names in Indian cricket made their first strides in International cricket in this very tournament.
Let’s take a look back at India’s best matches in the U-19 World Cup:
India U-19 vs South Africa U-19 Finals 2008, Kuala Lumpur 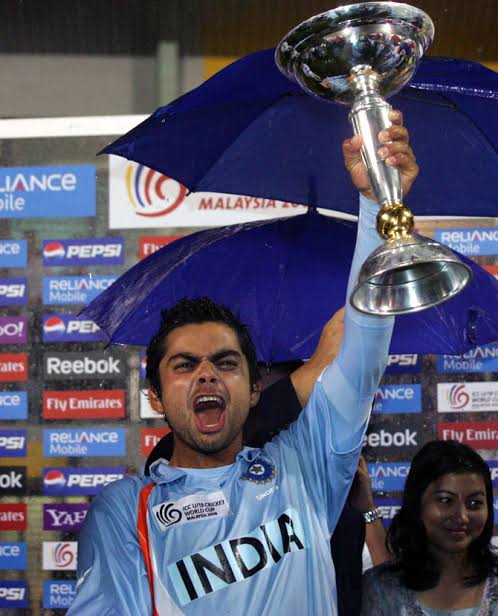 India had lived up to the expectations by reaching the finals and Virat Kohli’s side were favorites to go on and lift the trophy, but they had to overcome a very spirited South African side who were expected to fight, and so they did. India were bundle out for just 159 in 45.4 overs thanks to some excellent bowling and fielding display from the  South Africans. India knew they had to bowl out of their skins if they wanted to make a contest of this game.
Rain intervened and D/L saw South Africa having to chase 116 in 25 overs to lift the trophy. Indian bowlers struck early and South Africa found themselves 3 down with just 11 runs on the board. With wickets in regular intervals from Ravindra Jadeja and Iqbal Abdullah in the middle overs, India made it tough for the South African batsmen and ensured India lifted their second ever Under-19 trophy. That day the world took notice of a very special cricketer and the leader in Virat Kohli.
India U-19 vs Australia U-19 Finals 2012, Townsville

To beat Australia in Australia is not easy and to do it in a final chasing, definitely not. Unmukt Chand and his boys had a very stiff task ahead of them in the finals facing a very good Australian side in their backyard. The Indian bowlers started off well with Sandeep Sharma getting rid of both the openers that saw Australia in all sorts of trouble at 38 for 4.
It was Travis Head and Boristo who then went onto  put up a 65 run stand for the fifth wicket with the later going on to score an unbeaten 87 which saw Australia reach a very competitive total of 225. India needed a good start, but they got off to the worst possible one losing opener Prashanth Chopra for 0. Unmukt Chand and Baba Aparajith put on a 73 run stand before Aparajith was caught of the bowling of Gurindher Sandhu but it was the day of Unmukt Chand who produced one of the finest knocks of the tournament and chose the perfect day to go and do it scoring an unbeaten 111 of 130 showing great composure and maturity in a tense chase. It’s a pity that Unmukt Chand has not lived up to the expectations but that doesn’t take away anything from one of the best days in Indian cricket.
India U-19 vs Australia U-19 Finals 2018, Mount Maunganui 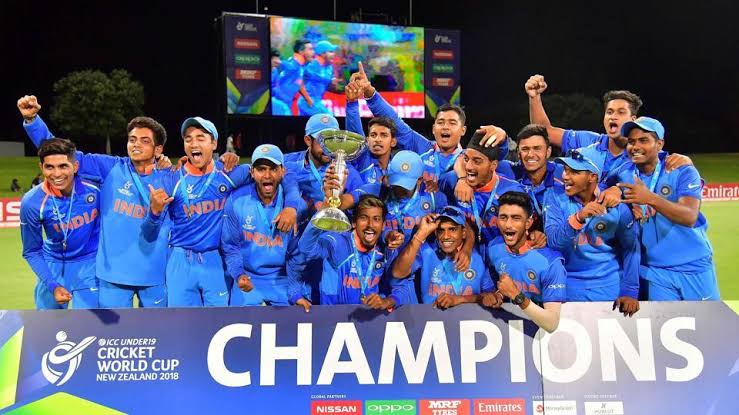 Indian side lifting the trophy remaining unbeaten in the tournament

“We were fortunate enough to have Rahul Sir as our coach” said an emotional Shubman Gill after receiving the Player of the tournament and so did every other player who gave a post match interview that day. This Prithvi Shaw led team was a complete package terrific openers, raw pace with the new ball and brilliant control by the spinners in the middle overs and it was only right for them to go on and lift that trophy.
When India were announced to play the finals against Australia there were fond memories from 6 years back but playing Australia in a final is tough and brings a whole new challenge with it. India struck in regular intervals after Australia won the toss and elected to bat first. Australia never really got momentum going in their innings and were dented by good tight bowling by Shiva Singh in the middle overs and Kamalesh Nagarkoti upfront and went on to post a modest total of 216 on board.
India walked the chase with absolute ease thanks to a dashing hundred from Manjot Kalra. The southpaw from Delhi went on to score an unbeaten 101 from just 102 balls smashing 8 fours and 3 maximums in the innings. India clinched the trophy and finished unbeaten throughout the tournament.
India U-19 vs Sri Lanka U-19 Finals 2000, Colombo

It started very early for Kaif and Yuvraj

Yuvraj Singh and Mohammad Kaif has gone on to put up some match winning partnerships for India over the years, but their journey of winning together in the Indian blues started very early. It was overcast and windy and probably due to the occasion of the finals Sri Lanka decided to bat first in front of packed SSC crowd. The support was unreal for Sri Lanka but the Indian pacers settled in well and soon broke the back of the Sri Lankan innings with Shalab Srivastava starring with the ball taking some very crucial wickets early on.
Chasing small totals are hard and the occasion can get the better of you but India sailed smoothly thanks to some sensible cricket from the openers and a good partnership from Reetinder Sodhi and Niraj Patel helped India cross the line in a tricky chase. Yuvraj Singh was awarded the man of the tournament for a brilliant all-round performance throughout the tournament, and that is where it all started for a champion in Indian cricket history, Yuvraj Singh.
India U-19 vs Pakistan U-19 Semi Finals 2019, Christchurch 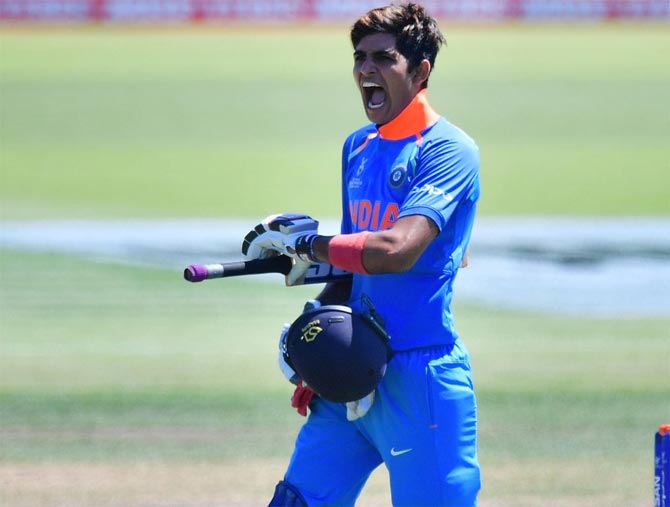 Shubman Gill after his sensational hundred against Pakistan

India vs Pakistan always brings about an excitement as it is very rarely these days that the  two teams face off. Despite it being a clash of the Under-19’s there was a lot of buzz around this contest and India vs Pakistan means much more than just a contest to everyone part of it. India won the toss and elected to bat first and got off to a good start courtesy Prithvi Shaw and Manjot Kalra but the stage was set for Shubman Gill who showed temperament of the highest order and displayed his array of strokes on his way to an unbeaten 102 off just 94 balls .
Pakistan struggled and couldn’t really compete against the quality of the Indian bowling lineup and this time it was the pace of Ishan Porel which did the damage with Pakistan finding themselves at 20 for 3 . Pakistan never really had a way back from that situation and were all out for just 69 and India winning by 203 runs. This result went on to show the gulf between these two nations in the cricketing arena and might have been the birth of the next big thing in Indian Cricket, Shubman Gill.
There have been a lot of glorious moments for India in the Under-19 World Cup over the years and this  Priyam Garg led side would love to script history when they begin their campaign against Sri Lanka on the 19 later this month.
TAGIndia u-19 India under-19 U19 Cricket World Cup
Previous PostWI v IRE: Evin Lewis continues good form with match-winning ton as West Indies sweep series 3-0 Next PostIND vs AUS, 1st ODI: India look to avoid frequent ODI blips against inspired Australia

Where To Watch BAN vs AUS T20I series live: Streaming, TV Details, fixtures and Squads For Bangladesh vs Australia T20Is

After a difficult tour of the Caribbean last month, Australia will continue their build-up towards this year’s T20 World Cup in UAE and Oman with another...