Home Analysis England are far from a settled unit in T20s

England are far from a settled unit in T20s

The decider of what has been a fascinating series between two top teams resulted in India clinching yet another series victory. England suffered their second consecutive loss while chasing as they fell 36 runs short of India’s mammoth 224-2. The 2-3 series loss has highlighted the areas England needs to work on.

The Eoin Morgan-led English team has been the strongest and most fearless white ball team in the last half decade. Having etched their names in history books with a World Cup triumph in 2019, Captain Morgan’s next target is winning the T20 World Cup later this year. World no. 1 ranked England have a very strong unit but they still have some glaring flaws that need to be addressed.

How they can get the best out of Ben Stokes

Ben Stokes is one of those players that captains just love to have. Well rounded skillset, a never-give-up attitude and an ability to rise up when the odds are stacked against makes Stokes a special player. While he’s a proven performer in ODIs and Tests, his numbers in T20s do not quite give justice to his potential.

Up until the fourth T20I, Stokes averaged 19 and struck at 132 in T20 internationals. These numbers are not acceptable for a lower middle order batsman. On an average he faces only 11 balls per innings, which is a colossal waste of his abilities. It’s evident that he struggles to score at a quick rate against spin early in his innings. He loses his shape against pace too often trying to force the shot when he has to clear the fence from the get-go.

On the flip side, there’s a high ceiling in playing him top of the order. Stokes thrives on timing the ball. Getting in early allows him to take his time and play his natural game. Once he’s set, he has the skill to take on spinners too. Stokes has shown what he can do if he gets time. Be it in his opening stint with Rajasthan Royals where he amassed 285 runs in 8 innings at an average of 40.71 and strike rate of 142.50 or in his 46 off 23 in the fourth T20I. Since Roy has made himself undroppable with his recent outings, England’s next best option is to push Stokes at number 3.

England’s middle order woes start with Dawid Malan. Before this series, Malan had a tremendous record in international T20s averaging 50+ and striking at 150. But his game is based on laying a platform which was always going to be an issue once he starts failing to make up for those slow starts. With no prior experience on these wickets, he has struggled to get going, scoring 80 runs at a strike rate of 103 in first four matches. He’s been dismissed to spinners thrice. And even though he scored 68 in the firth match, scoring rate of 8.9 rpo is well below par in a 220+ run chase. In an Indian World Cup, having Buttler, Bairstow, Stokes all of whom have the ability to rein in, does England really need an anchor who usually starts too slow?

England can’t be too reliant on Buttler anchoring the big run chases or Morgan finishing games alone. Stokes moving up the order and bringing in Sam Billings or power hitter Liam Livingstone solves plenty of issues.

England also have to make better use of Sam Curran or Moeen Ali whoever plays depending on conditions and opponent. Both are misfit in the finishing role but are adept at spin hitting, only makes sense to use them as floaters. Moeen Ali, apart from being an excellent off spin counter against LHBs, is one of the best boundary hitters in the world especially against spin.  England will be better served with him in the playing eleven if used correctly. 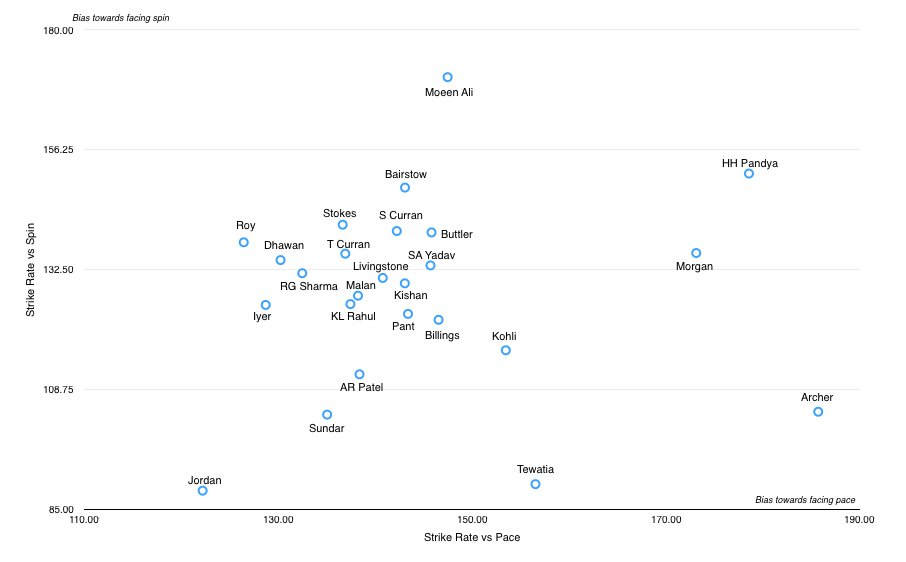 Jofra Archer’s power hitting abilities are known to the world. In IPL 2020, he scored at 179 strike rate, smashing 10 sixes in 63 balls he faced. Continually batting him below Curran and Jordan in death overs is appalling from England and it has already cost them a match.

Spearheaded by Jofra Archer, England have a very good bowling attack comprising Wood, Rashid, Jordan with Stokes and Sam Curran or Moeen sharing the fifth bowler’s quota. But it has some shortcomings.

Chris Jordan is regarded as a specialist death overs bowler but his recent form is very concerning. In T20Is this year, he has conceded runs at 13.37 in death overs. For a specialist, this output is extremely bad. England also have Tom Curran in the squad who is a similar type and for some reason keeps getting opportunities.

Chris Jordan in T20Is this year:

They have some good pace options waiting in the wing. The likes of Stone, Saqib, Mills and Topley need to be given opportunities.

The lack of quality and depth in the spin department barring Adil Rashid is also a worrying factor considering where the world cup is being held. Bringing Moeen Ali in the playing XI should be a no brainer. A good IPL season could push his case forward. They should also have Parkinson and Briggs in the scheme of things.

England have as many as 11 T20 internationals lined up before the World Cup and an IPL season that can help them in many ways. They would like to plug the holes in their squad before they start their World Cup campaign.