Home Features Hardik Pandya: The return of the most important piece in India’s LOI puzzle

Hardik Pandya: The return of the most important piece in India’s LOI puzzle

701
0
Teams around the world are in search of players who add more dynamics to their side than being able to contribute to one aspect of the game in the limited-overs scene. Players who can contribute in all departments are the heart and soul of successful sides around the world. India hasn’t had a great success of finding quality all-rounders for quite some time now but Hardik Pandya has shown more than just promise and that is why India will be very keen on keeping a close eye on his return from injury with months to go for the T20 World Cup in Australia.

“After trying everything, we came to the conclusion that it wasn’t working. I noticed that I was not able to give my 100% and that meant I was not doing justice to myself and the team. That is when I decided to go for the surgery.” – Hardik Pandya on why he decided to undego the sugery

Hardik decided to undergo a back surgery after the South Africa T20I’s in September last year, a surgery which he had delayed for quite some time as he knew it would keep him out of action for quite a long while. But after finding it hard to keep up with the demands of international cricket, Hardik decided to go under the knife. 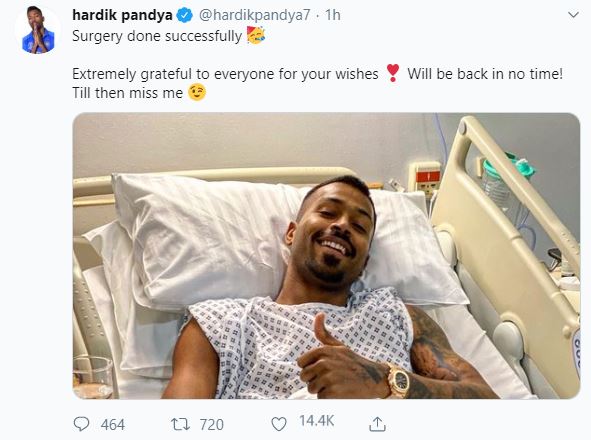 The BCCI has previously come under criticism for rushing players post-injury setbacks without enough rehabilitation time but they have been very careful with the recovery of Hardik Pandya.
Hardik, in fact, was expected to be returning in the middle of India’s tour of New Zealand but he had been asked to wait to prove match fitness which has seen him play the DY Patil T20 Tournament.  He took to social media to show the efforts he put on in bulking during this tough phase.
Also Read: Poonam Yadav only India in ICC’s team of the Women’s T20 World Cup
Hardik grabbed the headlines on his comeback tournament as he looked in scintillating hitting form with the bat as he went on to score an unbeaten 158 off just 55 balls for the Reliance 1 side. He also registered a five-wicket haul capping off a fantastic return for him in his comeback trail. He also scored a 105 off just 39 balls in a group stage match in the same tournament. 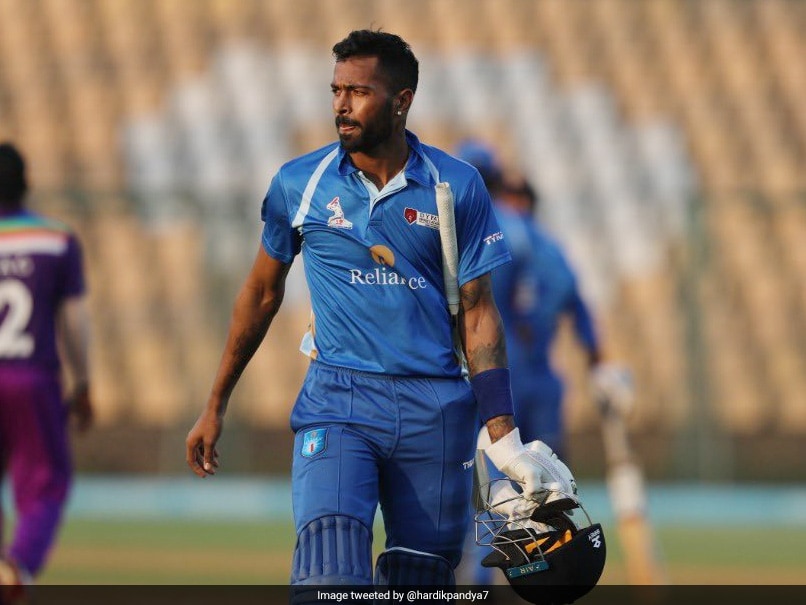 Hardik Pandya was unbeaten on 158 off 55 balls with 20 sixes and 6 fours in his innings
How important is Hardik Pandya to this Indian side?
When you talk about Hardik Pandya you almost inevitably talk about his power-hitting but there is more to him than just the swagger with the bat. When in full flow Hardik can clock good speeds and also has the odd variations which highlight his skill set as a bowler.  Pandya brings in a different dynamics to this Indian side. Kedhar Jadhav has been dropped from the Indian side for the first time since the World Cup and that has only been delayed due to Hardik’s absence.
Hardik’s role with the bat is so much more important to this Indian side considering it lacks the firepower towards the lower middle order. KL Rahul has also displaced Pant as the number one keeper in the LOIs. This means India lack someone who can change gears at ease towards the end of an innings or in a tight chase and Hardik’s return is just the right ingredient for India to tick off that box before the T20 World Cup. Hardik Pandya has the best strike rate (147.61) among India’s top seven batsmen who have played a minimum of 10 innings(T20Is), a list which includes the likes of MS Dhoni and Yuvraj Singh. In Hardik’s absence, Ravindra Jadeja has been filling Hardik’s shoes as a finisher but Jadeja’s strike rate of 105.71 is the least among batsman who has played in top 7 for India in the T20I’s (min 10 innings).

Not only with his batting but Pandya adds a lot of value with the ball as well. On a pitch that is holding up a bit or has something in it for bowlers, Pandya is very much a capable bowler who can get in his 10 overs. He has a good slower ball which he has developed over the years and also a nice bouncer to add to his armoury.
Since the 2016 World T20, only four-seamers in world cricket have taken more wickets as a fourth or fifth bowling option than Hardik. Despite his economy being on the higher side, this stat goes on to show his ability to pick wickets which is a very important aspect in the T20 format.
To add to his resume you can count on him to save at least 10-15 runs for your side in the field. In fact, he can make an impact in the game just with his fielding.
So these facts and figures back up why Hardik is one of India’s finest cricketing talent and it’s hard to see that he has not yet done full justice to his immense potential in the international stage. There is quality in this lad and we won’t be surprised if we are about to see the best few years of this talented Baroda all-rounder.

Your RatingUser Rating: 0 ( 0 Votes )
TAGHardik Pandya
Previous PostPlea in HC against IPL cricket matches in wake of COVID-19 Next PostLanger in search of ''white-ball finisher'' like Dhoni